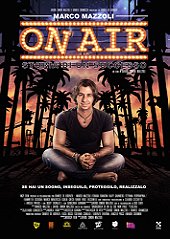 It is not Lone Wolf or The early bird catches the worm. On-Air Success Story is a movie, but at the same time a game. It is a story, but also a stream of consciousness. It is a work for use and consumption of the fan and at the same time the best way to learn about the phenomenon that is Marco Mazzoli. Phenomenon because one who makes those plays is. Phenomenon because the landlord of the 105 Zoo is one to study because no one like him: if it is true that Stern is the beautiful radio boss, dirty and bad, Mazzoli it is the Italian, who has made a cialtrocazzonismo 'art, of total freedom a totem, the craziness, the surreal, the chaotic but organized madness, a winning mix. Phenomenon, finally, because "the DJs who do not like" can give it to drink at all with that smile and jokes that would have you believe that yes, he is one of the road suddenly and said a big ass. One that goes from Noise, trade winds and Wender in Maccio Capatonda, Herbert Ballerina and Ivo Greedy, and stays there at the top (in fact, is even better) and then the other if takes them as well, it is not any one. Has such a natural, innate, unique. But also an ability to develop, write, think, change, control, manipulate (the public, the radio storytelling - just think of the jokes and the Situationist closures of the Zoo, the lists of enemies ever drafted, the time machine), outside the ordinary. Mazzoli, for this writer, is a genius. One of those in the audience for two-thirds has admirers who consider it one of the family and one third detractors who listen to him with a disarming consistency "to see where it will come." And he cares: the vestal virgins who would like more mazzoliano Mazzoli, the hater who expect to shoot against the excesses (and perhaps force him to pause for a month or two).
On air-success story is not a biography. Are the first 40 odd years of a guy who has done it, who has the head too American - Blessed was Walt Disney who gave the dad and the family the opportunity to broaden our horizons - to be hindering from the misery of ' eternal Italian province, and that has set limits. With the radio, with life, with women, with the leaders, with friends. And with the cinema, because few in his place would have put his face, to play themselves, as deus ex machina.
About, it must be said, of David Simon Mazzoli. Who wrote with him Radiography of a DJ who does not like it, do not listen to the Zoo (writer yes, even during class university too many years ago), who decided immediately not to hide behind an apologetic biographical documentary or classic biopic. Animation, funny scenes, deconstruction of the script and the language of cinema, suspension of credulity, it allows more or less all of this young filmmaker who, like his cousin, does not like limits. The work has a naive trend but at the same time able to hold together the various souls, painting a portrait fragile, sweet, histrionic, fickle of a man who has never allowed anyone to stop him. Bravo Giulio Greek to interpret the Marco ride to success, as well as Dario Eros Tacconelli to play the ghost writer a little 'penniless and a little' snob who has to carry through the biography. He lived and fictionalized reality come together, telling sincerely those who have always had a dream, carried it out, and now he lives great. forgets nothing Mazzoli, but more than the betrayal of the past looks to future challenges. And the director sowing fun, entertainment, but also dramatic moments: the scene of Judas (indeed of St. Peter, or almost: "three of them will betray me"), the second before the first featuring the new team, a lunch with elderly mother (a Chiara Francini that carves out a sweet role and means certain, with the comic brilliance put aside in favor of a few well-placed melancholy) brushstrokes that says a lot of the DJs fragility, without having to explain. The cast of big names - Marzocca, Tognazzi, Giannini - is played well, to embody the inevitable stereotypes (the mentor, the boastful publisher, the bastard manager and bigoted) a bit 'gigioneggiando and a little' putting the craft. And so, like the Zoo, you find yourself in front of a striking work, never classical, deliberately discontinuous, folk and choral, with Mazzoli showman, but able to give way to his many cronies.
It comes almost as bad to wish him good Marco. Because his is a fairy tale, in this country that now has a few of wonders. Because he has done it. Because if people like me still chasing a dream (to make radio like him, and maybe with him, among others), they owe it to people like him. To whom does not give up. Who falls, to rise. And win. And maybe because everything is going great, it rushes. To remember what it tastes like dust. Who never says yes when it suits them, but only when he goes.