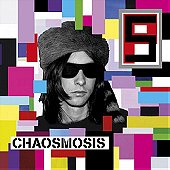 Eleventh album. Of water has passed under the bridge since that "Screamadelica" who devoted 25 years ago Primal Scream Bobby Gillespie to commercial success, with a bewitching blend of dance, rock, house, dub, neo-psychedelia. Practically a revelation for many, looking for exciting news. But in addition to water are also passed several incarnations of the band's sound, which in the meantime has explored and expanded its horizons, changing direction several times - now with remarkable results, now less restrictive.

This new "Chaosmosis" represents another step in this path of research chameleon, creating an album that in some ways can call the attitude of "Screamadelica" for the brightness, the sound approach lightness and contemporary pop. But Gillespie & Company have tried as much as possible to avoid the citation of the proven, assembling - in fact - this album with an eye to what is happening around them, and not surprisingly they called to their court, as guests and collaborators , even Haim and Sky Ferreira - two realities that, like it or not, represent a cross section of what is pop "new school" of the twenty-first century.

"Chaosmosis" at first listen it sounds like a light cocktail, of those who slurp with pleasure to start an evening set to grow: catchy melodies, atmospheres never oppressive or anxiety-provoking, the nail polish and a patinatissima moods, rock / psychedelic suggestions reduced to minimum, almost impalpable. All this, however, made and shaped with the typical class that Gillespie has demonstrated how innate gift - and that allows him to roam like a chameleon in many different musical worlds (from protopunk stoogesiano of the beginnings, through the dance rock, neo-psychedelia, pop, southern rock, Madchester sound ...). And the first two thirds of the album are a great poster that celebrates this special ability, suggesting a never banal version, or plastic / homogenized to use of the market, what the definition of pop can evoke in 2016.

The problem is that it is the end of the brief and tense "When the blackout meets the fallout" something seems to crack. A trick far too sugary and easygoing as "Carnival of Fools" casts a shadow on what is heard good up to that point and precipitates the band in limbo electropop from fast food, stuff that they will Primal Scream, nor have they We wanted to be (we hope). "Golden rope" instead it is a good bit more rock, stonesiano aftertaste or the "Give ut but do not give up", but in the economy of the disc does not particularly make sense. Not to mention the closure of "Autumn in Paradise", pimp, condescending and very Nineties, perhaps even potentially a commercial success, but little relation to the spirit of the record.
TRACKLIST
Trippin 'On Your Love
(Feeling like a) demon again
I can change
100% or nothing
private wars
Where the light gets in
When the blackout meets the fallout
Carnival of Fools
Golden rope
Autumn in paradise