A Matter of Life and Death review
287 Views
1

Review of A Matter of Life and Death 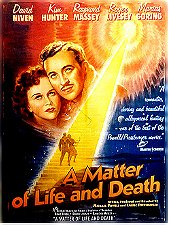 A really clever plot, and a beautiful film in general. I don't want to give a synopsis; its so clever, I think it would be too much of a spoiler. This romance/war film is timeless and should be viewed by everyone, no exceptions.

For the time the cinematography and set designs were epic, despite being an 'old' film it is in no way dated or cheesy. A classic, and an underrated one at that note! Better than many of the cinema canon that people chirp on about. Over looked and brilliant.9/10