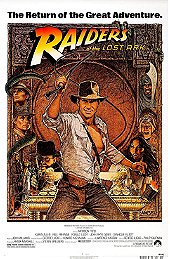 "For nearly three thousand years man has been searching for the lost ark. It's not something to be taken lightly. No one knows its secrets. It's like nothing you've ever gone after before."


The Indiana Jones films became the most influential adventure films in cinematic history. The films made their mark on the genre and still influence the way adventure films are made to this day. What's the allure of the series? Put rather simply, all the Indiana Jones films impeccably merge action, exhilarating adventure, dazzling locations, marvellous humour and a mixture of great characters. Raiders of the Lost Ark is the first instalment in the highly acclaimed Indiana Jones series, and still the superior film. The elegance and class of this movie is so far unrivalled and unsurpassed even after several decades.

Set in 1936 on the eve of World War II, Dr. Indiana Jones (Ford) is a renowned archaeologist and a famed adventurer. Jones grows tired of lecturing students at a university; instead he adores trekking through the jungle touting a whip and a gun while searching for ancient artefacts. After an incredibly memorable opening sequence set in Africa, Indy is hired by the United States government to investigate the possible existence of the 'Ark of the Covenant'; an ancient relic that appears to be the cause of strange doings by the Nazis. Indy is pitted against rival archaeologist René Belloq (Freeman) who is also searching for this illustrious ark that has been nothing but myth and legend for centuries.

This fascinating story is merely the beginning as the film rapidly moves to numerous different locations around the globe from Nepal to Cairo.

Harrison Ford is unreservedly perfect for the principal role of Indiana Jones. Ford possesses that certain look about him that suits the role of both an adventurer and a professor. His dialogue is delivered extraordinarily, and his on screen magnetism is one of the film's highest points. Ford has all the wit and appeal: the character of Indiana Jones is the essential embodiment of an adventure hero that encompasses all the qualities and the charisma that makes him one of the best action heroes of all time (as voted on several occasions). Ford is partnered with the equally charismatic Karen Allen. Playing Indy's love interest, this isn't the usual clichéd damsel in distress who can't fend for herself. On top of this there's a remarkable performance by John Rhys-Davis, and unforgettable performances from both Paul Freeman and Ronald Lacey.

Steven Spielberg's direction is magnificent. This focused directing and the lavish cinematography are qualities rarely seen in contemporary adventure movies. I particularly loved the old school effects and the elaborate sets. With such gorgeous images on the screen for every second of the film's duration, it effectively moves from one memorable scene to the next.

The opening artefact hunt is still my favourite film opening of all time. Not to mention all the other memorable scenes - the bar fight, the plane scene, the snake pit, the truck chase, the ship battle, the final showdown...it's impossible to spot a dull second amongst the action and adventure. The outlandish stunts are a requirement for an adventure film of this calibre. The filmmakers deliver a never-ending supply.

The special effects delightfully hold up even after all these years. With filmmaking technology forever advancing I am pleased and happy to see such terrific old school effects that still look mighty impressive.

When I was a youngster I remember watching Raiders of the Lost Ark on various occasions. The first three Indiana Jones films were an essential part of my childhood. Now that I've aged and matured I still love these original three films tremendously. This is unquestionably one of the best movies of all time! Followed by several sequels beginning with Indiana Jones and the Temple of Doom (this is actually a prequel).