Masks are for Racoons and Thieves Only 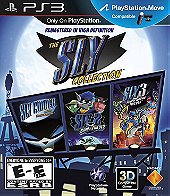 Having never finished the second game in the series back when the games first came out in 2002 I was interested in playing them when I heard Sony was making a HD remake. And it was a fun play through.

The game series stars Sly Cooper and his band of thieves as they go from place to place in attempts to steal certain objects and foil master plots from a score of bad guys.
The first game, Sly Cooper and the Thievius Raccoonus, follows the team in finding the missing pages of the Thievius Raccoonus which holds the family thieving secrets of the Cooper clan and by doing so stopping the plan of the evil Clockwerk, a mechanical owl, from killing Sly and taking over the world.
Sly 2: Band of Thieves, the second in the series, follows the group in finding and destroying the recovered mechanical part of Clockwerk.
Game three, Sly 3: Honor Among Thieves, has the crew recruiting the help of others to help stop Doctor M, a evil genius monkey, from opening the Cooper Vault and stealing the family's treasures that have been accumulated over the years.

One of the main draws to the collection is its high definition update to the visuals. When the games were first released the graphics were considered very stylized due to the cell shading and with the update those graphics are really bought out and looks great.
The game is completely voice acted and while the writing can be cheesy most of the voice actors are well done and cartoon like exaggerated to give humor.
The controls back when the games came out were considered one of the best in the industry and while most of the time the controls are responsive and spot on there are some times where the controls can be frustrating when missing a jump or going in to wrong direction for no good reason but it's fairly uncommon.

Anyone that never got a chance to go through the games or a big fan of the games should have a good time playing the games and reminiscing on old school PS2 gaming.