A Pocket Dictionary of Synonyms and Antonyms review
164 Views
0 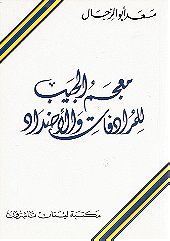 It's hard to say how awesome this 100 page book is. If you know anything about Arabic books, then you know searching for a good thesaurus is like searching for El Dorado. There just aren't many around (see my review of Using Arabic Synonyms). This little book even boldly claims to be the first of its kind. Now, I'm told there's a difference between a "dictionary of synonyms and antonyms" and a thesaurus, but wordsmithing aside, this book is a thesaurus.

Most common words of the media lexicon can be found in simple, alphabetical order. The words following each entry include high-level synonyms and antonyms. However, there are no example sentences, so usage will have to be determined from another source. The book also has two mini-appendices: one for animal habitats and one for animal sounds. Set phrases such as "a chicken clucks, a dog barks, a sheep bleats, etc." are given in Arabic. The real value of this book is as a quick look-up for standard, "higher-level" synonyms for simple or "lower-level" vocabulary. By "higher-level," I mean words that are considered more-or-less to be used less frequently in written media (newspapers, magazines, Internet articles and journals) or hardly ever in spoken media (broadcasts, public announcements, official speeches). While you and I, as native English speakers, may scoff at the idea of trying to "sound educated" or "higher level" in our own language, you should probably understand that among educated Arabs there is a deep admiration for writers, poets and speakers who are able to breathe life into the classical style of the language. This may be because the purest form of the language is believed to be as old as al-Qur'an al-Karim (the Koran), and people who speak properly are doing culture a favor. Well, that's what I've taken from culture classes and interactions with Arab-American teachers, anyway.

Sadly, this little book was intended for Arab audiences only and is therefore printed only in Arab countries. You may be able to find it through a book importer.