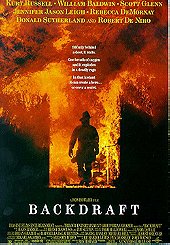 Every young boy going up has a fantasy of becoming astronauts, firefighters, police officers, Olympic athletes, etc.
I personally wanted to be an astronaut but fireman was a close second and when I first saw Backdraft I was completely enamored. And even after growing up and picking a better and more interesting career path I still find Backdraft an excellent movie and brings back great memories.

William Baldwin plays Brian McCaffrey who as a young boy sees his veteran firefighter die in an fire and who later follows in his father's and older brother Stephen McCaffrey's, played by Kurt Russell, foot steps and becomes a firefighter himself.
Brian is pushed hard by his brother while in his fire house to the point that he takes up the offer of a local politicians to help Robert De Niro's character Donald Rimgale find out the cause of a string of related fires but falls into a conspiracy that shakes his world and the fire department.

William Baldwin portrayal is not very exceptional in the film but Russell, De Niro, and Scott Glenn's performances more than makes up for it that they all feel to be veteran firefighters.
Being made in 1991 the music has some remnants of 80's but is almost completely overshadowed by Hans Zimmer's Fighting 17th which is iconic to the movie and later used as the theme music for the Japanese show Iron Chef.
The icing on the whole entertaining cake is the visual effects. While some of the effects were made in post-production for scenes that were too hard or too dangerous some of the flames were real with the help of rubber cement and mechanical ingenuity using multiple flammable substances that gave the film an almost real feeling of fires out of control.

Even after 20 years after its initial release (crap, I feel old) Backdraft is a wonderful film that still visually stands out to modern films and is a personal favorite that brings back my childhood.