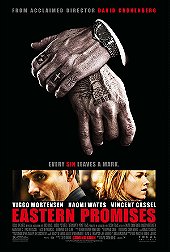 I watched the movie back when it was just coming out but didn't like it too much because I was a little confused to what I was going on but I blame myself because I probable wasn't paying attention. After watching it again, I shouldn't been such a idiot because it was a excellent movie.

Naomi Watts plays Anna Khitrova, a British midwife, who comes across a diary from a girl who dies in childbirth. Trying to get the diary translated to find any relatives for the baby, Anna finds her way to a Russian restaurant that is run by one of the London's Russian mafia bosses and gets in deep trouble as she finds out what the diary entails.
On the other side of the story is Nikolai Luzhin, played by Viggo Mortensen, who is the mafia family's driver and "cleaner" and is wanting to get into the family's more devious business. When Nikolai meets Anna he tries to keep her and the baby safe while trying to keep his true intentions secret from the family.

Viggo Mortensen's role as Nikolai is a sigh to behold. I mean if it weren't for his other roles in films I would have sworn that Mortensen was Russian and a former Russian mobster.
Everyone else on the cast plays their characters wonderfully except for maybe Vincent Cassel but that might be because I know he's French and can't get pass that.
I'm a fan of traditional music from other countries including Russia and some of those are present in the film which give the soundtrack some character as the rest of the film is pretty standard symphonic music that compliments the senses well but aren't truly memorable outside of the movie.

David Cronenberg's films are pretty hit or miss for me but Eastern Promises will always be one of his best films and Mortensen's portrayal will stick with me for a long time.