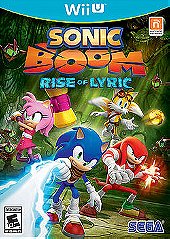 Sonic Boom is a game in 2014 (I think) not produced by Sega and Sonic Team, but by some amateur called Big Red Button, the idea in 2010 sounded incredible and could be the explosion Sega (Do you understand? New Boom! Ja ! ... ha ha ......) Anyway, when the game started being developed in 2011 all were supporting, but in the period of three years gradually got worse during development Rise of Lyric were many delays and problems in studies of Big Red Button as layoffs and resignations of workers which seriously affect the final product, so that production is left in the hands of Bob Rafei in recent weeks, Sonic Boom Ryse of Lyric was heavily criticized and belittled by the gaming community and experts in video games because a lot of factors such as problems in controls, audio failures visual, a rate of very low frame among others, as you can see, the reception was Horrible among both new and experienced players, how step?

I understand that when a game is no delay in the game, the final product is not as good, but not only Sonic Boom was not as expected, if not, that is, TERRIBLE, I give you reasons because it was very bad

1.Amateur Studio: Big red button is an amateur empreza, was on the verge of bankruptcy, but for some reason Sega will pay for the game, note that laziness had to make another game right?

2.Controls: The controls that were chosen are uncomfortable and can constantly fail and a lot of failures in the movement and reaction of the characters

3.Bug / Lag: The study did retraces the people who tested the game would be fired, developers tried to replace his work, unfortunately did not have experience, testers tried to make all sorts of combinations to find bugs and things, the developers did not know how one could discover and felt they had to spend the entire game and try things to see if hacerunas had errors.

4.History: I can not describe it's a very loose story! Best finish this review


Now we know a little more on how bad this game, it is a complete disappointment, but Sega is never as reliable, always we remember the 2000s where they had good games, now may surprise as colors sonic, but certainly 90- 2000 were better. I am Majikali and see you soon