I've been here before 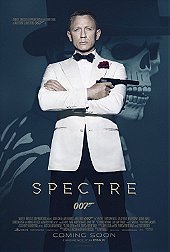 The Bond movies are noted for their pre-credits sequences and Spectre is no exception in that respect.  The opening scenes in Mexico City are quite spectacular and technically brilliant, featuring a fantastic lengthy tracking shot which lasts for several minutes without any edits.  The choreography is extremely accomplished and the action quite gripping.  It's arguably one of the best opening sequences of any Bond feature.
After that Spectre becomes somewhat of a business as usual effort.  The themes of mortality and surveillance were quite interesting and certainly gave the film a contemporary feel but neither are explored in any great depth, which was disappointing.  At one point Bond tells someone that he kills people for a living, following which it would have been interesting if he had reflected on his own mortality but the writers preferred to move him quickly on to the next action sequence.  A shame.  Spectre is certainly a well mounted production, the action sequences are exciting, the cast give strong performances and the exotic locations are as enjoyable as ever.  Plot-wise however, it was all somewhat of a Bond by numbers and it all felt rather generic.  I would have liked to have seen more innovation but this was a very self-referential film, with many scenes being simply pastiches of previous adventures; the costumes at the beginning echo that of Baron Samedi from Live and Let Die, there is a fight on a train, as in From Russia With Love and The Spy Who Loved Me, the bad guy has a massive base in the Ken Adam mould and is surrounded by the usual set of ineffective goons who serve as cannon fodder for Bond.  It's an approach that is somewhat reminiscent of the final Pierce Brosnan outing Die Another Day and although Spectre was certainly superior to that weak effort, in terms of imagination it was far from what the series has achieved in the past.  There are also some connections with the other Daniel Craig Bond films but these didn't really add anything to the story and stretched credulity.  A couple of Craig-era motifs also reappear; Bond is a loose cannon (again) and he ends up in collapsing buildings at a few points.  All of which is feeling a bit tired by now.
A novelty this time is that one of the Bond girls is much older than usual.  Played by Monica Bellucci, Lucia Sciarra becomes another notch on Bond's bedpost, which must be of record breaking dimensions by now.  Bellucci was good in the part but her brief appearance serves mainly as a plot element to enable Bond to infiltrate the engimatic Spectre organisation.  I couldn't understand why she was attracted by Bond either, as he is at his least charming at that point.  Maybe she was supposed to be some kind of masochist, or maybe it was just bad writing.  I'm not quite sure.  Bond spends more time with the younger Dr. Madeleine Swann (Lea Seydoux) and his relationship with her was fortunately more involving.  Seydoux was very good in the role and she managed to create a character with a certain level of complexity.
Christoph Waltz played the bad guy this time and his performance is a marked contrast to the larger than life one which was given by Javier Bardem in Skyfall.  This was perhaps a wise choice in that it might have backfired to have more grandiose scene-chewing histrionics, but it did feel a little flat to me.  There is a coldness to Waltz's characterisation reminiscent of Joseph Wiseman's Dr No, with Waltz underplaying every scene.  It successfully conveyed a sociopathic personality but the script didn't give the malevolent head of Spectre much to do so the stakes felt a lot lower than they did in the last Bond movie, resulting in a less engaging story.
Overall Spectre is far from the best in the series, but it is a serviceable effort benefiting from the usual high production values of the series.  I was never bored at any point and there are some exciting sequences to be enjoyed, but it was weaker than the brilliant Skyfall.  I certainly want Bond to return, as he always does, but I hope that the script writers will have had a few new ideas about where to take the series by then.