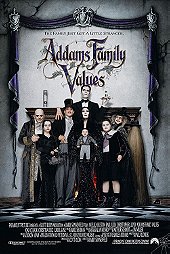 I believe God himself casted this film. Never has there been a more perfect collaboration between actors on screen! Its also a comedy which makes that fact even more amazing.

Morticia was up the duff at the end of the first film, so that sets up the beginning of this one. A new addition means change and not for the best. The older siblings of newly born Pubert are jealous of the attention he receives from the older generations. After various whacky and cruel events, the Addams' hire a nanny who isn't what she appears to be.

Fester once again becomes an integral role to the plot, which further seperates this film from the original TV Series.

I can almost picture the film in my mind because I am so familiar with it. Laughs all round, cheery dispositions dealt with and an almost glowing feeling left when you finish up watching.

Raul Julia died after hearing they were making a sequel without him and the other greats of this Duology!