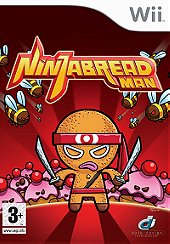 The Wii, while becoming a global phenomenon making video games popular amongst crowds of folks who once looked down on them, is packed to the gills with awful games. Much like the Atari 2600 back in the video game crash in the early 80's, several terrible games are being released on a regular basis just in order to make a quick buck off of the popularity of the system. Less than a year after its release in North America, there were already several shopping centers selling discount packages of Wii games. Ninjabread Man was one of the first ‘discount’ games for the Wii...And there’s a reason that it wasn’t released at the normal fifty dollar tag.

Ninjabread Man would be a sub-par platformer as it is, however it’s transformed into an almost unplayable mess due to the implementation of the Wii’s motion controls. You’ve got to shake the nunchuk to jump, then shake the remote to swing your sword, and control the movement of the character with the analog stick on the nunchuk. These controls would be alright (except for the jumping which feels very awkward) if it weren’t for the fact that they’re done poorly. Any action involving motion controls has a fifty percent chance of actually working. If you go and try to attack an enemy with a full health bar, it’s not out of the question for that enemy to kill you while you’re wildly swinging your controller around trying to get the Ninjabread Man to swing his sword just once.

The jumping is so bad that it deserves its own paragraph in this review. As I stated earlier, the jumping feels very awkward. This makes it very difficult to get used to the controls. Making it even harder is the fact that the motion sensor aspect is done so poorly that you’ll likely have an even more difficult time getting used to the controls. If there wasn’t so many platforming elements in this game, the jumping wouldn’t be as big of a deal...But you’ll often need to do platform jumping to advance. When jumping is this important of an aspect in a game, there’s no reason for it to be the weakest part of your control scheme.

But alas, even if the controls were done well, Ninjabread Man still wouldn’t be much of a game. The levels are laid out poorly and are pretty boring to wander around in. Also, the concept of the game and characters are kinda neat, but not neat enough to keep you playing through the bad controls and boring levels. Had this game gotten more polish and they created more imaginative levels, this game might be decent...But it didn’t get any of that. It didn’t get any of it at all.

Graphically, the game is a tad on the bland side, but it’s not completely awful. In all honesty, the graphics almost look like they’d be more at home on the Nintendo 64 than on the Wii...But, the environments sometimes have some charm to them, which helps the game out visually. Unfortunately, the music is pretty awful. It sounds like they went to a dollar store and grabbed a CD titled “Generic Party Music for Deaf People” and thought that it’d be a great fit for their game. Technically, it is a pretty good fit, though. Afterall, they’ve got awful music to match the awful gameplay.

Ninjabread Man is just a poor game all-around. I’d say that roughly seventy-five percent of the folks that sit down and play this will give up during the training level...Specifically the first part of training where you learn how to jump. The poor controls ravage an already bad game and just further prove that Ninjabread Man is part of a stale batch of games undeserving of the ‘Nintendo Seal of Quality’ that they’ve somehow obtained.