Started good but fizzled out 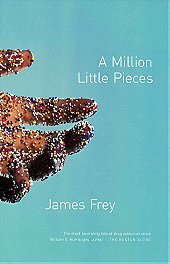 I admit I picked this up because I was curious about all the controversy/scandal it caused in the media when it came out. I wanted to see what all the fuss was about myself. At first I was liking the book and while there were a few things that seemed far fetched they weren't so much so that I didn't stay interested. After awhile though it started to seem repetitive and not just the phrases he said, but how many pages can one read about vomiting before they get downright annoyed? The main character started to grate on my nerves while the story ran on but I think the secondary characters were good, I was much more interested in them than James. When It came to rating the book I was stuck between it was ok (5) or I didn't like it (4), I went with the 4 because by the end I was skimming through most of James' story and dialog, just wanting to hear the other characters' stories and dialog. I think had the author written the book (and published it) as a work of fiction and not tried to make it into a memoir focused on him, it may have been a better first novel, as it was it came across not only as far fetched, but as juvenile and narcissistic.