If I were a religious man... 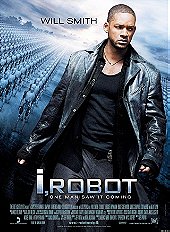 ...I would still enjoy this film.

After a period of sequels, Will Smith managed to bag this role which I feel he thoroughly deserved. My friend quoted to me after the film finished: "Smith is back." I couldn't have agreed more. (But then he made Hitch & Shark Tale :( )

Anyway, this film focus' around a future where Robotics have been made part of commercial society. Having an NS-4/5 is a basic necessity. Everyone has one which they rely on constantly and the company that makes them seems to have infinite resources. Perfect set-up for Dystopia!

One man defies the societal law of relying on Robots, Del Spooner! After some tragic accident, he no longer trusts the machines. They lack the emotional quality that most organic beings posess which he feels is heartless and doesn't want anything to do with them. Not in this future though! His daily routine usually involves cooperating with scallies and robots of various types. The man doesn't catch a break.

It also follows a Detective story motiff which all good dystopic future narratives should have. The investigation has him exploring what he has always dreamed of: The machines not being as perfect as everyone is lead to believe. Once again, the laws of robotics are used in mainstream cinema. However, this film manages to portray it in a different light. How AI can eventually evolve to the point where the laws have an alternate meaning.

The amazing visuals and cityscapes were worth every penny. If you're gonna portray the future you need to show more of the setting than four walls. You need to see inside and out aswell. As pointed out in Prelude's list, the product placement is shameful but I didn't find it noticeable until I saw that list so they didn't ruin my viewing pleasure.

Cue explosions, 'car' chases, malfucktions and the colour Blue. Definitely worth a watch.