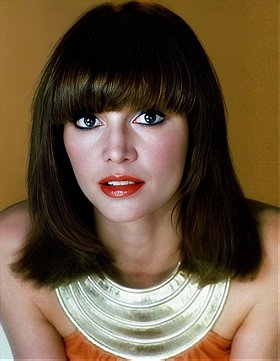 Principal was born in Fukuoka, Japan, the eldest daughter of United States Air Force sergeant Rocco Principale, after whom she was named and who was then stationed in Fukuoka. Her paternal grandparents were emigrants from Italy, originally surnamed Principale. Her mother, the former Bertha Ree Veal, was born in Georgia and was of English descent. Because her father was in the US military, they moved often; she grew up in London, Puerto Rico, Florida, Massachusetts, and Georgia, among other places. She attended 17 different schools, including studying at the Royal Ballet School while her family was stationed in England.

She began her career in TV commercials, appearing in her first at age five. After graduating from South Dade Senior High School in 1968, she enrolled at Miami-Dade Community College, intending to study medicine. However, months before completing her first year of studies, she was seriously injured in a car crash while driving home from the library. The other driver was convicted of drunk driving and served jail time. Principal spent months in recovery and was faced with the prospect of having to take her first year of studies over again. After a period of serious introspection, she drastically changed her life by moving to New York City to pursue her acting career, and shortly thereafter to Europe. She studied at the Royal Academy of Dramatic Art in London, and then in 1971 moved to Los Angeles.

In 1970, Principal moved to Hollywood. She had no money, no car, no agent, and no prior television or movie-making experiences beside the commercials she had made in her teenage years. She supported herself by teaching backgammon, which she had learned while living in London, that was becoming a popular game played by many in Hollywood. Nine months later Principal had a car, an agent, still little money but auditioned and won her first film role as Marie Elena, a Mexican mistress, in Paul Newman's The Life and Times of Judge Roy Bean (1972), for which she earned a Golden Globe Nomination as Most Promising Newcomer. Because of the response to Principal's footage in the film, the role was enlarged on a daily basis by the writer, John Milius. Producers, agents, and other interested parties began showing up at the remote location in Benson, Arizona. For the most part they were showing up to sign Principal to her next film. During this period of time Warren Cowan flew in, introduced himself to Principal, and offered to represent her free of charge for the next year. Principal has been a client of Rogers & Cowan ever since. She flew to Arizona a complete unknown; when she returned to Los Angeles three months later, the commercial flight she was on was greeted by throngs of paparazzi. Subsequently, she appeared in The Naked Ape (1973) with Johnny Crawford and appeared nude in Playboy magazine to promote the film. The film's failure disappointed her.

In 1974, she was cast in the disaster film Earthquake. Although the role had been narrowed down to three actresses, Principal won the role when she showed up for the third audition having cut off her waist-length brown hair, dyed it black, and put it into an afro. The producer was stunned and impressed by Principal's risky transformation in order to look more closely like the Italian character Rosa. Principal won the part in that moment. She continued to act in lesser-known films such as I Will, I Will... for Now and Vigilante Force with Kris Kristofferson. She was given a three-picture deal with Brute Productions. However, Principal decided to stop acting and became an agent, which was her profession from 1975 to late 1977.

In 1977, Aaron Spelling offered her a role in the pilot of his television series, Fantasy Island, which she accepted. Soon after, in 1978, she landed her most famous role, playing Pamela Barnes Ewing in the evening soap opera television series Dallas. In 1983, she earned a Golden Globe Nomination as Best Actress in a Television Series for her role in Dallas.

After nine years, Principal left Dallas in 1987. She went on to star in various made-for-television movies such as Mistress, Blind Witness, Naked Lie, Sparks: The Price of Passion, and Don't Touch My Daughter, a few of which she co-produced. In 1994, she appeared in an episode of the hit sitcom Home Improvement. Principal returned to primetime soap operas in 2000, when she appeared in another Aaron Spelling production, the short-lived NBC television series Titans.

3. The Battle of the Sexes

1. The Battle of the Sexes

nitevision voted for an image 2 weeks ago

fullfathom voted for 3 images 4 weeks ago

Nevskij Prospekt voted for 7 images [View All] 1 month, 2 weeks ago

looksharp voted for an image 2 months, 2 weeks ago

Clarabowlover voted for 29 images [View All] 2 months, 2 weeks ago

piotrek123 voted for an image 3 months, 3 weeks ago

bloodmoon voted for an image 3 months, 3 weeks ago

charlieb100 voted for an image 4 months, 1 week ago

David Roffidal voted for an image 4 months, 1 week ago

lovedriver voted for an image 4 months, 1 week ago

burnodo voted for an image 4 months, 3 weeks ago

radigast voted for 3 images 5 months ago

Mass. Patriot voted for an image 5 months ago

Nevskij Prospekt voted for an image 6 months ago

Campagnola voted for 31 images [View All] 7 months ago

maxmilflover voted for an image 7 months, 3 weeks ago

Nevskij Prospekt voted for an image 8 months, 3 weeks ago

EFPaisley voted for 2 images 9 months ago

David Roffidal voted for 12 images [View All] 11 months, 1 week ago

parryj voted for an image 11 months, 1 week ago

emberlin voted for an image 11 months, 1 week ago

lovedriver voted for 13 images [View All] 11 months, 2 weeks ago