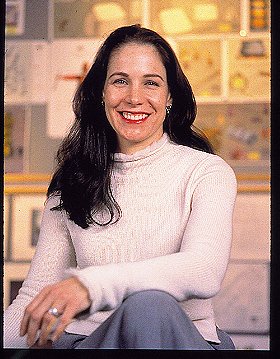 Jenson "started as a background artist at Hanna-Barbera in 1977, became a storyboard artist for Warner Bros., Marvel and Disney Television, and variously worked as a production designer, art director and co-producer". She got one of her earliest starts working for Filmation doing the storyboard backgrounds on the He-Man and the Masters of the Universe cartoon series in the early 1980s. She also worked on Mighty Mouse in the 1980s and the The Ren & Stimpy Show in the early 1990s, and was the art director for FernGully: The Last Rainforest in 1992, and the production designer for Computer Warriors: The Adventure Begins and Playroom. She began working for DreamWorks as a production designer and story artist for The Road to El Dorado in 2000, and co-directed Shrek (with Andrew Adamson), and Shark Tale (with Bibo Bergeron and Rob Letterman).

In 2009, she finished her first live-action directorial work for the Alexis Bledel-starring comedy, Post Grad. ... (more) (less)
My tags:

1. Shark Tale: Gettin' Fishy with It

2. Shark Tale: Gettin' Fishy with It