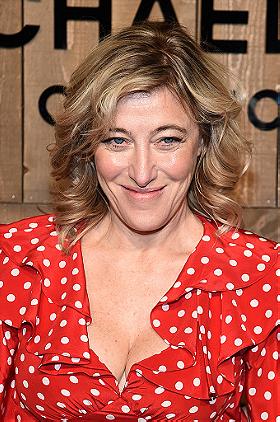 Older sister of Carla Bruni and younger sister of Virginio Bruni Tedeschi (1959 - July 4th, 2006).
Shares her birthday with singer Diana Krall.
Member of jury at the Berlin International Film Festival in 2004
Daughter of Alberto Bruni Tedeschi, an industrial, and Marisa Borini, a concert pianist.
Es más fácil para un camello... (2003), the first movie she directed, is based on her real life experiences as daughter of a rich family.
As her family became a target of the communist Red Brigades in Italy, she grew up in Paris, France since 1975.
Sister-in-law of former French President Nicolas Sarkozy. Aunt of Giulia Sarkozy (second child of Carla).
In March 2009 Valeria and her former boyfriend, French actor Louis Garrel, adopted Celine, a Senegalese baby girl. Celine was born in 2008 and was 6 months old.
Alessandra Martines, an Italian actress and former classical dancer, is her cousin.
Her brother Virginio Bruni Tedeschi died on 4 July 2006, from complications of HIV/AIDS.
She was formerly in a relationship with French actor Louis Garrel from 2007 to 2012. He is 19 years her junior.
She wrote, directed and starred in Un castillo en Italia (2013). The movie was nominated for the Palme d'Or at the Cannes International Film Festival in 2013 and is in many ways autobiographical.
Aunt of Aurelian Enthoven, first child of her sister Carla.
Speaks Italian and French.

[press conference for Un castillo en Italia (2013) at the 2013 Cannes Film Festival] What we wanted to show in this film was two people: there was the mother and Louise, for whom faith is very important. The mother is deeply involved in faith - there are disputes, quarrels, but you have the impression that she's a real believer. With Louise, there is a scene that we cut out during the editing; she was a believer when younger, but she's lost this belief, so she tries to knock on the door, she tries to open up the door to belief and to faith, but she somehow seems to remain outside all the time. She's not far from believing - it's a sort of a borderline situation which intrigues me a very great deal. You have this issue of both faith and superstition. We wanted to talk about someone who was trying to enter this house of faith.
[Cannes press conference for Un castillo en Italia (2013)] Often the desire to make a film is based on a scene. I wrote a scene where a man and woman are quarreling, you don't know why they're quarreling but they keep quarreling, and after three or four pages you finally understand that they're going to do an in vitro fertilization. And he changes his mind during the trip to the clinic, and that was the first scene that I wrote. Then what do I do? I show it to Noémie [Noémie Lvovsky] and Agnès [Agnès de Sacy], I say, "Do you like it?", if they say "Yes, it's pretty good", then we generally say we're going to produce a whole film. The Cherry Orchard by Chekhov was a great source of inspiration. I also wanted to shoot in the family house, which we didn't own any longer, I thought, "Maybe people will lend it to us free of charge", and that is in fact what occurred. It's a place I filmed in Es más fácil para un camello... (2003) and, from a cinematographic stance, it is full of inspiration and I could imagine people calling from a window - the brother who calls from a window - that's something I wanted to have in the film right away. The film occurred to me in images - we do the opposite of many other people - we write lots and lots of scenes, bits of dialogue, images, and then we try to create a whole story and put things into place. This takes much longer than when you actually write a story and then make the dialogues. It entails a huge amount of work to create a story that really is coherent, but Chekhov's book was a source of tremendous inspiration for us. ... (more) (less)
Tags: French (1), European (1), Italian (1), Actress (1), Francophone (1)
My tags:

Palermo Sicily voted for an image 4 months, 1 week ago

Anakin added this to a list 5 years, 10 months ago