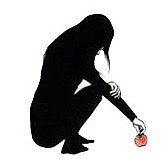 His real identity is a closely guarded secret. He has cited Shotaro Ishinomori, Fujiko Fujio, and Fujio Akatsuka as manga creators that he is heavily inspired by. As stated by the profile placed at the beginning of each Death Note manga, Ohba collects teacups and develops manga plots while holding his knees on a chair, similar to a habit of L, one of the main characters of the series. There is speculation that Tsugumi Ohba is a pen name of Hiroshi Gamō. Pointing out that in Bakuman. the main character's uncle was a one-hit wonder manga artist who worked on a gag super-hero manga, very similar to Gamō and Tottemo! Luckyman in all aspects. Also that the storyboards drawn by Ohba greatly resemble Tottemo! Luckyman in style. ... (more) (less)
Tags: Writer (1), Mangaka (1), Death Note (1)
My tags: