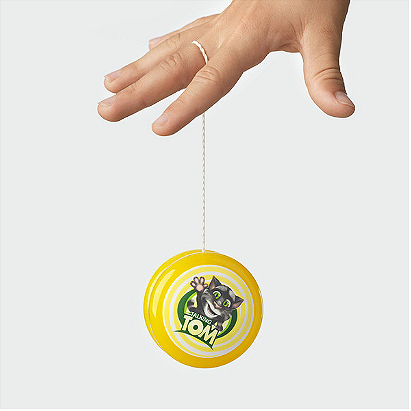 1 votes
Christmas in the 90s! (61 items)
list by Queen of Horror
Published 2 years ago

1 vote
View all Yo-yo (Yoyo) pictures (7 more)
A yo-yo (also spelled yoyo) is a toy which in its simplest form is an object consisting of an axle connected to two disks, and a length of string looped around the axle, similar to a slender spool.

It is played by holding the free end of the string known as the handle (usually by inserting one finger in a slip knot) allowing gravity or the force of a throw to spin the yo-yo and unwind the string (similar to how a pullstring works), then allowing the yo-yo to wind itself back to one's hand, exploiting its spin (and the associated rotational energy). This is often called "yo-yoing".

First made popular in the 1920s, yo-yoing remains a popular pastime of many generations and cultures. It was first invented in ancient Greece.

Queen of Horror added this to a list 2 years ago
Christmas in the 90s! (61 toys items)

kathy added this to Owned list 4 years, 4 months ago