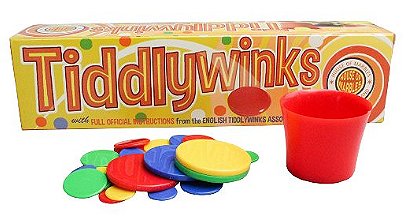 View all Tiddlywinks pictures (16 more)
Tiddlywinks is an indoor game played on a flat felt mat with sets of small discs called "winks", a pot, which is the target, and a collection of squidgers, which are also discs.

Players use a "squidger" (nowadays made of plastic) to shoot a wink into flight by flicking the squidger across the top of a wink and then over its edge, thereby propelling it into the air.

The offensive objective of the game is to score points by sending your own winks into the pot.

The defensive objective of the game is to prevent your opponents from potting their winks by "squopping" them: shooting your own winks to land on top of your opponents' winks.

As part of strategic gameplay, players often attempt to squop their opponents' winks and develop, maintain and break up large piles of winks.

Tiddlywinks is sometimes considered a simpleminded, frivolous children's game, rather than a strategic, adult game.

However, the modern competitive adult game of tiddlywinks made a strong comeback at the University of Cambridge in 1955.

kathy added this to Owned list 4 years, 3 months ago