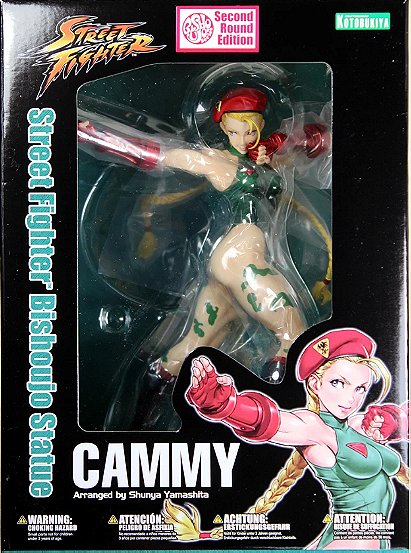 View all Street Fighter Cammy Bishoujo Statue pictures
Released on June 2018.
A KOTOBUKIYA Japanese import! The incredible Bishoujo statues from Kotobukiya, which have brought you everything from superheroines to Tekken fighters, return to the Street Fighter franchise with the amazing follow up to Chun Li, CAMMY! One of the bestselling video game franchises of all time, Street Fighter first debuted in 1987 with its unique blend of one on one combat and international characters (and fighting styles). Following the Chinese fighter as the second female character in the series, Cammy joined up in 1993’s Super Street Fighter II: The New Challengers. While initially believed to be an agent of Britain’s MI6, her backstory includes working for M. Bison and losing her memories, though none of that limited her fierce fighting styles. Now Cammy appears here in a brand new Bishoujo Statue based on new artwork by master Japanese illustrator Shunya Yamashita.

The fierce British fighter has never looked better, frozen in a wide-legged stance for stability while delivering a wicked backhand strike. Cammy strikes quite the pose, muscles tense and corded as she shows off her physique with limbs extended. She wears her iconic outfit consisting of a tiny green leotard decorated with the Delta Red logo, red gauntlets and beret, red socks, and black boots. Meanwhile, the pale skin of her legs is accented with sparse green camouflage patterns. Cammy is intricately sculpted and detailed with special attention paid to her exquisite anatomy, tied shoelaces, long flowing pigtails, and more. But even with all of her martial prowess on display there’s still a small smile on the elite fighter’s face!

Sculpted by Busujimax (Takaboku Busujima), Cammy stands 9 inches tall (1/7 scale) on a specially designed display base. The fierce British fighter looks great on her own and even better paired with the previously released Chun Li Bishoujo Statue from Kotobukiya!

boogiepop1989 added this to wanted list 1 year, 4 months ago