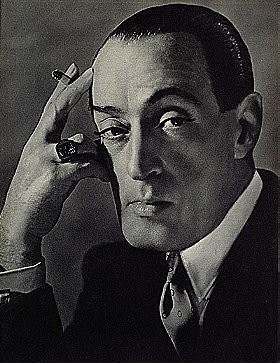 Totò was born in the rione Sanità, a poor and popular sector of the town where he met many famous artists like Eduardo De Filippo, and started his career in little theatres in which he learnt the art of guitti, the Neapolitan actors who acted without a scenery, like in the Commedia dell'arte.

He was the son of Anna Clemente and marquis Giuseppe de Curtis, who recognized him as his son in 1922. At his father's death in 1933 Totò was adopted by marquis Francesco Gagliardi Focas.

In 1922 he moved to Rome, where he had his first appearances in bigger theatres, performing the genre of avanspettacolo, a sort of music, ballet and brilliant show. Of these shows, also called riviste, he became a master and in the 1930s he had his own company, with which he travelled along all the nation.

In 1937 he appeared in his first movie, Fermo con le mani, and went on to appear in over a 100 films, many of which contained gags later absorbed in the Italian phraseology.

Some of his most famous movies are Totò E Le Donne, Miseria e nobiltà, I Soliti Ignoti, I Ladri, Totò E Cleopatra and Uccellacci E Uccellini.

Totò's strange figure, with the peculiar irregular face, soon became very popular and his comic gags were widely appreciated. From the 1950s onwards, he would have represented the most brilliant Italian comedy, even if official critics always denied him any artistic value. Yet, some of his spicy gags were object of parliamentary inquiries because, given his popularity, they could have been politically dangerous for the governments of Democrazia Cristiana.

It was with Pier Paolo Pasolini's Uccellacci ed Uccellini that Totò received a first admittance of his art, later better understood. He was already blind, and had started to compose poetry. His A livella is perhaps his most valuable one. The poem talks about Death, which levels all the social differences that divided us in life. Totò wrote songs too; Malafemmena (the bad girl) has been considered as one of the best ever written Italian songs.

madreporter voted for an image 2 years, 7 months ago

Mass. Patriot added this to a list 5 years, 4 months ago

Mass. Patriot voted for an image 5 years, 4 months ago