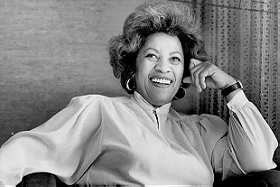 Toni Morrison was born in Lorain, Ohio, to Ramah (née Willis) and George Wofford. She is the second of four children in a working-class family. As a child, Morrison read fervently; among her favorite authors were Jane Austen and Leo Tolstoy. Morrison's father told her numerous folktales of the black community (a method of storytelling that would later work its way into Morrison's writings).According to a 2012 interview in The Guardian, she became a Catholic at age 12 and received the baptismal name "Anthony", which later became the basis for her nickname "Toni".

In 1949 Morrison entered Howard University, where she received a B.A. in English in 1953. She earned a Master of Arts degree in English from Cornell University in 1955, for which she wrote a thesis on suicide in the works of William Faulkner and Virginia Woolf.[5] After graduation, Morrison became an English instructor at Texas Southern University in Houston, Texas (1955–57), then returned to Howard to teach English. She became a member of Alpha Kappa Alpha sorority.

In 1958 she married Harold Morrison, a Jamaican architect and fellow faculty member at Howard University. They had two children, Harold and Slade, and divorced in 1964. After the divorce she moved to Syracuse, New York, where she worked as a textbook editor. A year and a half later, she went to work as an editor at the New York City headquarters of Random House. She also taught at Yale University and Bard College during these years.[5] As an editor, Morrison played a vital role in bringing black literature into the mainstream, editing books by authors such as Henry Dumas, Toni Cade Bambara, Angela Davis, and Gayl Jones.

Morrison began writing fiction as part of an informal group of poets and writers at Howard who met to discuss their work. She went to one meeting with a short story about a black girl who longed to have blue eyes. She later developed the story as her first novel, The Bluest Eye (1970). She wrote it while raising two children and teaching at Howard.

In 1975 her novel Sula (1973) was nominated for the National Book Award. Her third novel, Song of Solomon (1977), brought her national attention. The book was a main selection of the Book-of-the-Month Club, the first novel by a black writer to be so chosen since Richard Wright's Native Son in 1940. It won the National Book Critics Circle Award.

In 1987 Morrison's novel Beloved became a critical success. When the novel failed to win the National Book Award as well as the National Book Critics Circle Award, 48 black critics and writers[8] protested the omission.Shortly afterward, it won the Pulitzer Prize for fiction and the American Book Award. That same year, Morrison took a visiting professorship at Bard College.

Beloved was adapted into the 1998 film of the same name starring Oprah Winfrey and Danny Glover. Morrison later used Margaret Garner's life story again in the libretto for a new opera, Margaret Garner, with music by Richard Danielpour. In May 2006, The New York Times Book Review named Beloved the best American novel published in the previous twenty-five years.

In 1993 Morrison was awarded the Nobel Prize in Literature. Her citation reads: Toni Morrison, "who in novels characterized by visionary force and poetic import, gives life to an essential aspect of American reality." She is currently the last American to have been awarded the honor. Shortly afterward, a fire destroyed her Rockland County, New York home.[2][10]

In 1996 the National Endowment for the Humanities selected Morrison for the Jefferson Lecture, the U.S. federal government's highest honor for achievement in the humanities.[11] Morrison's lecture, entitled "The Future of Time: Literature and Diminished Expectations,"[12] began with the aphorism, "Time, it seems, has no future." She cautioned against the misuse of history to diminish expectations of the future.

Morrison was honored with the 1996 National Book Foundation's Medal of Distinguished Contribution to American Letters, which is awarded to a writer "who has enriched our literary heritage over a life of service, or a corpus of work."

In 2002, Morrison was invited to serve as the first Mentor in Literature in the inaugural cycle of the Rolex Mentor and Protégé Arts Initiative, an international philanthropic programme that pairs masters in their disciplines with emerging talents for a year of one-to-one creative exchange. Out of a very gifted field of candidates, Morrison chose young Australian novelist Julia Leigh as her protégée.

Although her novels typically concentrate on black women, Morrison does not identify her works as feminist.She has stated that she thinks "it's off-putting to some readers, who may feel that I'm involved in writing some kind of feminist tract. I don't subscribe to patriarchy, and I don't think it should be substituted with matriarchy. I think it's a question of equitable access, and opening doors to all sorts of things."

3. Toni Morrison: The Pieces I Am

1. Toni Morrison: The Pieces I Am

Agent Kermit D. Fonz added this to a list 2 months ago
Gone, but not forgotten (1497 person items)

omnivorousrex added this to a list 1 year, 5 months ago
Tribute...We miss you...Patriarchs of Hollywood (266 person items)

omnivorousrex added this to a list 1 year, 5 months ago
Tribute...Black excellance (161 person items)

Dj Levels added this to a list 1 year, 6 months ago

"In 1993, author Toni Morrison became the first African American and eighth woman to win the prestigious Nobel Prize for Literature."

SwtChaos added this to a list 2 years, 10 months ago

Brian G added this to a list 4 years, 8 months ago