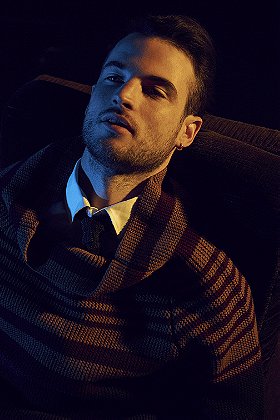 Sturridge was born in Lambeth, London, the son of director Charles Sturridge and actress Phoebe Nicholls, and a grandson of actor Anthony Nicholls and actress Faith Kent (née Heaslip). His maternal great-grandfather was photographer Horace Nicholls.

Sturridge was educated at the Harrodian School and at Winchester College, but he quit before sitting his A levels. The eldest of three children, he has two younger siblings, brother Arthur and sister Matilda, both of whom followed him into theatre arts. Matilda Sturridge is presently an actress, and Arthur was an original cast member of School of Comedy, which has aired on E4 after finding success at the Edinburgh Fringe Festival.

Sturridge began as a child actor and he was in the 1996 television adaptation of Gulliver's Travels, directed by his father and co-starring his mother. He reemerged in 2004 with Vanity Fair and Being Julia. In 2005 he played William Herbert, 3rd Earl of Pembroke in BBC4's A Waste of Shame.

In 2006, he played the role of Nigel in the psychological thriller Like Minds, also known by the title of Murderous Intent. It tells the story of two boys, Alex (played by Eddie Redmayne) and Nigel, placed together as room-mates, much to Alex's objections. Alex is horrified and yet fascinated with the ritual-influenced deaths that begin to occur around them, and when Nigel himself is murdered, Alex is blamed.

2. Far from the Madding Crowd

5. A Waste of Shame: The Mystery of Shakespeare and His Sonnets
View all Tom Sturridge TV

dj brr added this to a list 1 month, 2 weeks ago
you are so beautiful...to meee (53 person items)

matt added this to a list 2 years, 9 months ago
Most beautiful men on earth 5 (200 person items)

smithger added this to a list 3 years, 2 months ago
Most promising Actors (45 person items)

smithger added this to a list 3 years, 2 months ago
UK Stars of Tomorrow (19 person items)

Likho added this to a list 3 years, 8 months ago