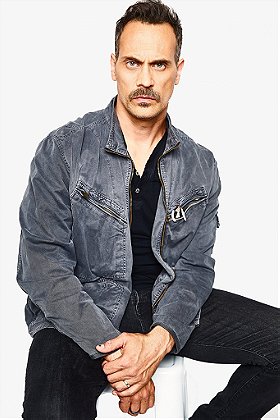 Following productions at The Second City Detroit and The Second City Northwest, he moved to New York. There, he formed a company of improvisers and began staging the underground critically acclaimed "Burn Manhattan" all over the city. Other performers included Kate Walsh, Jeremy Piven and Spencer Kayden.

Aside from his work in improvisational theatre, Stashwick worked for several years in late 1997 through Spring 2000 on "Late Night With Conan O'Brien," performing as part of their rotating stable of comedy actors.

Work in television and film ultimately drew him to Los Angeles where he soon landed roles in pilots and series and film.

Stashwick remains true to his improvisational roots, and he produces, performs and teaches at his own improvisational theatre that he co-founded in North Hollywood called "The Hothouse". In addition he performs annually with the Macabre improv cabaret The Doubtful Guests who just celebrated their ten year anniversary. He has also taught and performed his unique style of avant-garde improvisation internationally. He directed a show in Liverpool called "Hoof!," which still tours throughout Europe.

He is also the writer and co-creator of the online action/horror web comic Devil Inside. He publishes a new free episode weekly on his website [Link removed - login to see]. The comic has brought him to comic book conventions across the country with his collaborator, comic book artist Dennis Calero.

Stashwick resides in Los Angeles with his wife Charity, whom he married in 1997 in the middle of Times Square in front of twenty close family members and friends, as well as all of New York City. The couple has two children. Their household also includes two dogs, two cats and a Conure (small parrot).

In his spare time, Stashwick enjoys surfing, noodling on the ukulele, writing screenplays and pilots. He's an avid TV (his current favorites are Breaking Bad, Walking Dead and Doctor Who) and a huge Film buff (Star Wars, There Will be Blood and Hedwig and the Angry Inch are among his favorites) . A shameless geek he can be found playing video games with his son or with his nose buried in a comic book. He's been a vegetarian since 1988. He loves traveling overseas as often as his hectic schedule permits. A self-professed Anglophile, Stashwick loves English comedy, music and television. ... (more) (less)
Tags: Actor (1), Green Eyes (1), Syfy Nerd (1)
My tags:

5. Phineas and Ferb the Movie: Across the 2nd Dimension (2011)
View all Todd Stashwick movies (8 more)

5. You, Me and Dupree
View all Todd Stashwick movies (8 more)

AJJ added this to a list 2 years, 5 months ago

IsabellaSilentRose added this to a list 5 years, 4 months ago
Comic Con 2017 (227 person items)