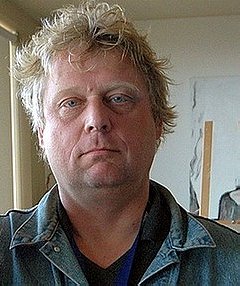 His last book (2003) was Allah weet het beter (Allah Knows Best) in which he - in his typical cynical, mocking tone - presented his views on Islam. He was a well-known critic of Islam, especially after the September 11, 2001 terrorist attacks. He supported the nomination of liberal (former PvdA [labour] party), Somalian-born female politician Ayaan Hirsi Ali for Dutch parliament. As of 2004, she is a Member of Parliament for the (right-wing) VVD party, which advocates limits to the admission of especially Muslim immigrants into the country.

Together with Hirsi Ali, van Gogh created the 10-minute movie Submission. The film is about violence against women in Islamic societies. It shows four abused women, naked under see-through dresses with Qur'anic verses in Arabic unfavourable to women, painted on their bodies. After the movie was released, both van Gogh and Hirsi Ali received death threats. Van Gogh did not take these very seriously and refused any protection.

As a newspaper columnist, he was known for being provocative and politically incorrect. He caused resentment in the Moroccan community by consistently referring to them as geitenneukers (goatfuckers), and incurred the wrath of leading members of the Jewish community by making comments about, as he saw it, the Jewish preoccupation with Auschwitz. He was also a staunch supporter of President Bush, and the American-led invasion of Iraq.