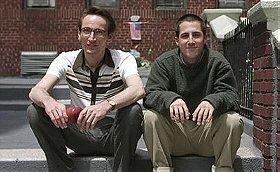 View all The Books pictures
The Books were an American duo, formed in New York City in 1999, consisting of guitarist and vocalist Nick Zammuto and cellist Paul de Jong. Their releases typically incorporated samples of obscure sounds and speech. They released three critically acclaimed albums on the German label Tomlab, and released their fourth studio album, The Way Out, on Temporary Residence Limited in July 2010.
My tags:

1. Dark Was the Night

2. The Lemon of Pink

1. Dark Was the Night

2. The Lemon of Pink

3. Dark Was the Night

4. Music For A French Elevator And Other Short Format Oddities By The Books

5. Lost and Safe
View all The Books music (2 more)