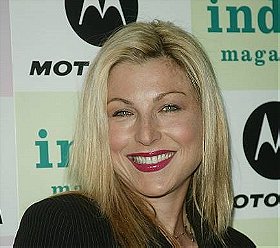 Michael Jackson claimed she was his first girlfriend and by all accounts his first big love. Tatum denies this in her autobiography, saying all that happened was that he briefly kissed her without permission when she was 12 and he was 17.

Recently published her memoirs, "A Paper Life", that exposes her troubled childhood, long battles with her father and Farrah Fawcett, her sexual encounters with Melanie Griffith, Jean-Claude Van Damme and Prince Albert of Monaco, her explosive union with John McEnroe and the bitter custody suit over her three children with the tennis great. [2004]

Her memoirs "A Paper Life" debuted at #4 on the New York Times Bestseller List.

According to her autobiography "A Paper Life", she was not named after her paternal grandmother as was widely rumored for years but actually named after jazz pianist Art Tatum.

Was cast as Blythe Hunter in "Wicked Wicked Games" (2006) after original choice Sean Young was fired after apparent clashes with its producers.

One of a very few performers to win an Oscar for their debut performance.

Was extremely vocal about being voted off of "Dancing with the Stars" (2005/I) before the disastrous Master P.

Disapproved of her father Ryan O'Neal's relationship with Ursula Andress so much so that she would speak about it to the tabloids even though she was just a child.

Was scheduled to appear as host on NBC's "Saturday Night Live" (1975) for the November 27, 1976 episode, but she was replaced at the last minute by Jodie Foster.

Was turned down by James Cameron for the role of Sarah Connor in Terminator (1984). Linda Hamilton ended up playing the part.

Was the second choice to play Violet in La pequeña (1978), along with Jodie Foster. However, neither Foster nor O'Neal were among the finalists; Brooke Shields won the part.

Gave birth to her 2nd child at age 23, a son Sean Timothy McEnroe on September 23, 1987. Child's father is her ex-husband, John McEnroe.

lovedriver voted for an image 7 months ago

motorolacelebs posted a image 7 months ago

PulpRoman added this to a list 2 years, 2 months ago

PulpRoman voted for an image 2 years, 3 months ago

SwtChaos added this to a list 2 years, 9 months ago
Then and Now (175 person items)

Andyb2 voted for an image 3 years, 7 months ago

SanyoMute voted for an image 4 years, 3 months ago

kathy voted for an image 5 years ago

sh56 posted a comment on this image 5 years ago

Milena added this to a list 5 years, 4 months ago
Dancing with the Stars (United States) (296 cars items)