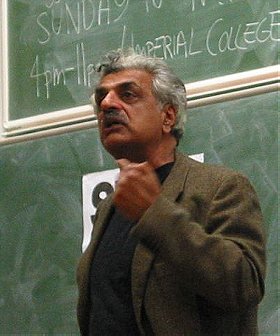 As one of the brown sahibs left by the British Empire, Tariq Ali distinguished himself a spokesman for anti-imperialism. His extensive knowledge of history and his dedication to the ideals of the Enlightenment made him a popular figure in the radical circles of the 1960s and early 1970s.

His reputation began to grow during the Vietnam War, when he engaged in debates against the war with such figures as Henry Kissinger and Michael Stewart. As time passed, Ali became increasingly critical of American and Israel foreign policies, and emerged as a figurehead for critics of American foreign policy across the globe. He was also incensed by American relations with Pakistan that tended to back military dictatorships over democracy.

He was one of the founders of the New Left of the 1960s and has long been associated with the New Left Review. Once himself a member and leader of a Trotskyist party, the International Marxist Group (IMG), and co-author of Trotsky for Beginners, in 1990 he wrote a bitter satire, Redemption, on the inability of the Trotskyists to handle the downfall of the Eastern bloc.

His book Bush in Babylon attacks the invasion of Iraq by American president George W. Bush. The book contains a unique style, using poetry, and critical essays in portraying the War in Iraq as a complete failure. An atheist who grew up around Muslims, Ali is skeptical that the new Iraqi government will be effective.

His previous book, Clash of Fundamentalisms, puts the events of the September 11 Terrorist Attacks in historical perspective, covering the history of Islam from its foundations until today.

Tariq Ali is also a contributor to Counterpunch Magazine. ... (more) (less)
My tags:

1. The Clash of Fundamentalisms: Crusades, Jihads and Modernity

2. Pirates of the Caribbean: Axis of Hope

4. A Sultan in Palermo: A Novel (Islam Quintet)

1. The Verso Book of Dissent

2. Pirates of the Caribbean: Axis of Hope

3. A Sultan in Palermo: A Novel (Islam Quintet)

4. The Clash of Fundamentalisms: Crusades, Jihads and Modernity