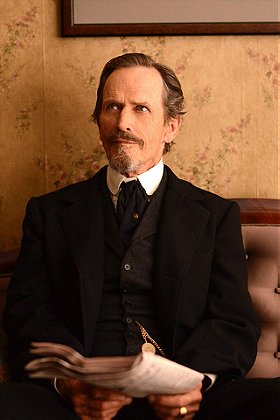 McHattie was born in Antigonish, Nova Scotia. A graduate of the American Academy of Dramatic Arts, he has appeared in many films and television shows including Star Trek: Deep Space Nine, Star Trek: Enterprise, Highlander: The Series, and American Playhouse's Life Under Water (1989). His roles include 300, A History of Violence, The Fountain, Secretary, Shoot 'Em Up, Life with Billy, One Dead Indian, Beverly Hills Cop III.

In Canada, he appeared in Canada: A People's History as Canadian hero Major-General Sir Isaac Brock, and in The Rocket as legendary coach Dick Irvin. He also portrayed Jacques Pasquinel in the James A. Michener production of Centennial. He portrayed an extraordinary USMC sniper (based on real life sniper Carlos Hathcock) in the JAG season one episode "High Ground".

In 1976 McHattie played James Dean in the television movie James Dean: Portrait of a Friend, a television adaptation of the biography written by James Dean's friend and writer Bill Bast.

McHattie appeared in several episodes of Seinfeld (beginning with "The Pitch") where he played Dr. Reston, Elaine Benes' manipulative psychiatrist/boyfriend. He also appeared in two episodes of The X-Files. From 1998 - 2000 McHattie had a recurring role in the Canadian-made TV series Emily of New Moon, based upon the 1923 novel by Lucy Maud Montgomery. Since 2005, he has appeared as Captain/Commander Healy in all eight of the Jesse Stone series TV movies, which are based on the novels of Robert B. Parker. ... (more) (less)
Tags: Canadian (2), Director (2), Actor (2), A History Of Violence (1), X Files (1), Male (1), February (1)
My tags:

1. Jesse Stone: Benefit of the Doubt

4. Who Is Clark Rockefeller?

TrekMedic voted for an image 4 years, 4 months ago

Leo added this to a list 4 years, 7 months ago

How Did This Get Made All-Stars (189 person items)