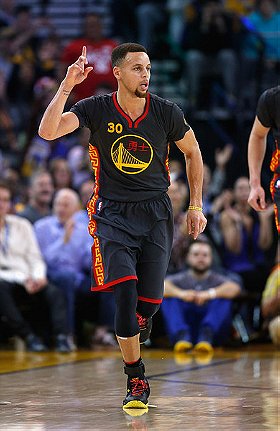 Curry played college basketball for Davidson. There, he was twice named Southern Conference Player of the Year and set the all-time scoring record for both Davidson and the Southern Conference. During his sophomore year, Curry also set the single-season NCAA record for three-pointers made.

Curry was selected with the seventh overall pick in the 2009 NBA draft by the Golden State Warriors. During the 2012–13 season, he set the NBA record for three-pointers made in a regular season with 272. The next season, Curry and teammate Klay Thompson set the NBA record for combined threes in a season with 484 as the pair were given the nickname the "Splash Brothers". In 2014–15, Curry eclipsed his own record by knocking down his 273rd three-pointer on April 9, 2015, finishing the regular season with 286 three-pointers and was named MVP after leading the Warriors to a franchise-record and NBA-best 67 wins on the season. ... (more) (less)
Tags: The Hampton's Five (1), Golden State Warriors (1), NBA Champion (1), Splash Brothers (1), NBA MVP (1), Born 1988 (1), Basketball (1), NBA (1)
My tags:

Georgini added this to a list 1 year, 2 months ago

Smiler1 added this to a list 1 year, 10 months ago
Fave NBA players that are career 80%ft (5 person items)

Smiler1 added this to a list 4 years, 6 months ago
Favorite NBA players of All-Time (11 person items)

CitizenErased voted for an image 4 years, 6 months ago

CitizenErased rated this 8/10 4 years, 6 months ago

kathy voted for 9 images [View All] 4 years, 6 months ago