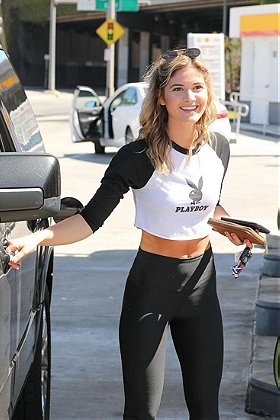 At the age of 17, Shauna Sexton began her career by working as a Level 1 Trainer cum Receptionist at Crossfit Stapleton. After working there for a year from June 2013 to May 2014, she joined the Obs Seafood restaurant as a server at tables. In December that year, she bagged the position of Veterinary Surgical Doctors Technician at Skylos Sports Medicine and worked there till June 2017, when she moved to Veterinary Specialty and Emergency Center (VSEC) of Thousand Oaks as a Veterinary Surgical Technician. She also worked as a model as a side job and often posted pictures on her Instagram profile. One of her earliest recognitions as a model came after she was selected as the 'CoverGirl of the Month' for the month of December 2014 on the Writtalin website.

As 'Miss December', she was also interviewed by the website, which was published alongside a series of gorgeous pictures of the emerging model. However, she gained widespread media attention in mid-2018 after she was selected as the 'Playboy Playmate of the Month' in May and made news headlines in August after being spotted having dinner with actor Ben Affleck following his 46th birthday. Tagged by the media as a 'mystery woman', she was soon recognized for her flourishing career as a model and her successful stint as a Playboy Playmate.

IchBinEinNerd rated this 10/10 3 months ago

nbcortez added this to a list 1 year, 1 month ago
New Hotties (147 beauty items)

northernhokie rated this 9/10 2 years ago

hulkargh posted a comment on this image 2 years, 2 months ago

"Who is the other beautifuuuuuul girl ?"

ORION added this to a list 2 years, 4 months ago
Models/Other people added by ORION 20 (6 beauty items)