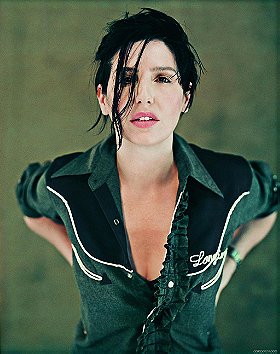 Spiteri has a large lesbian fanbase, although she is heterosexual.
When Texas released their debut single, "I Don't Want a Lover", in 1989, Spiteri was adamant that she didn't want a 'girly' image and insisted on 'Big E' Levi jeans and a denim jacket. She wrote and performed the title track to the 1990s sitcom Ellen, and once appeared alongside Ellen DeGeneres in the opening credits.
Additionally, according to an article in the Scottish tabloid Sunday Mail, Spiteri's song "Don't Keep Me Waiting" (from the Melody album) will be used in the final season of The L Word, Showtime's popular drama about a group of lesbians living in West Hollywood.
Her latest album, The Movie Songbook, includes at least two romantic songs which have been recorded with the original male-centric lyrics: "What's New, Pussycat?" and "Oh, Pretty Woman". ... (more) (less)
Tags: Scottish (2), Singer (2), Brunette (2), British (1), Born In 1967 (1)
My tags:

psow voted for an image 1 year, 1 month ago

Marek added this to a list 4 years, 8 months ago

Viro voted for an image 4 years, 9 months ago