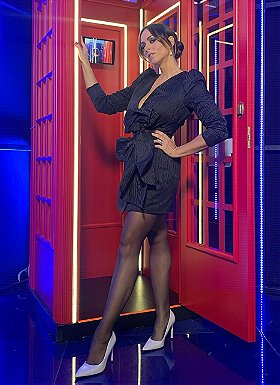 In September 2009 she returned to Mediaset in the role of correspondent (along with Cristina Del Basso, Francesca Fioretti and also Francesca Cipriani, but the latter present only in autumn 2009) of the transmission of Barbara D'Urso Domenica Cinque. In summer 2010 she became, together with Cristina Del Basso and Francesca Fioretti (who had also been sent for the entire second season of Pomeriggio Cinque) plus the new-entry Veronica Ciardi, sent by A gentile richiesta, summer preseral conducted by Barbara D'Urso on Channel 5. In September 2010 she was joined by Veronica Ciardi and Patrick Ray Pugliese as colleagues-sent on Domenica Cinque, with whom she also participated, again as a correspondent, in Pomeriggio Cinque from September 2010 for the entire 2010-2011 season. She then followed, together with her fellow reporters Veronica Ciardi and Patrick Ray Pugliese, the host Barbara D'Urso, in the transmission of New Year's Eve New Year's Eve and in the prime time show (finished in advance for low ratings) Tonight that evening! in January 2011.

She leads (together with I Turbolenti, Marco Milano and Veronica Ciardi) the comedy show Piazza la Risata broadcast from Monday to Friday on Comedy Central (Sky channel 122) and in 2011 she also participated in the third episode of the program on Rai 2 in honor of the 150th anniversary of the Unification of Italy hosted by Massimiliano Ossini and entitled I Love Italy.

In September 2011 she was again sent of Pomeriggio Cinque for the 2011-2012 season together with Veronica Ciardi[10], Patrick Ray Pugliese and the new-entry Margherita Zanatta: together with them and the valet of Pomeriggio Cinque Marco Ceriani, she also participated in the second edition of New Year's Eve Cinque. In January 2012, however, the Garitta and Pugliese leave Pomeriggio Cinque: she switches to Sky, while he participates as an Invader in Big Brother 12. In April 2012 Garitta has been in prime time on Channel 5 twice: on April 1st she was a guest at the final of Big Brother 12 (for a joke made to Patrick Ray Pugliese: note that Garitta is the first ex-winner ever to participate, as a guest, in another final of Big Brother) and on April 18th she participated in Jokes aside (in the role of the "accomplice" of the authors in the joke made to Platinette). In the summer of 2012, together with Cristina Chiabotto for the second summer in a row, he leads the comedy show Comedy Tour Risorgimento on Comedy Central.

Since January 2013 she is one of the main presenters of Lottomatica TV where she presents every day Bingo in Famiglia and Bingo Night Show with her colleague Simone Repetto. From September 2013 is one of the correspondents of Sunday Live and Afternoon Five, Channel 5 program, and got a culinary column on Sunday Live. From 2015 he collaborates with Sportitalia in the B-Lab program.

rasputin68 voted for an image 1 month, 2 weeks ago

nicerack rated this 9/10 3 months ago

crossrossa rated this 10/10 4 months ago

fansitalia rated this 10/10 6 months ago

TrekMedic voted for an image 1 year, 6 months ago