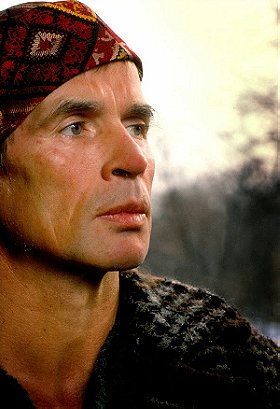 Nureyev was born on a Trans-Siberian train near Irkutsk, Siberia, Soviet Union to a Bashkir-Tatar family. He began his early career with the company that in the Soviet era was called the Kirov Ballet (now called by its original name, the Mariinsky Ballet) in Leningrad. He defected from the Soviet Union to the West in 1961, despite KGB efforts to stop him.This was the first defection of a Soviet artist during the Cold War, and it created an international sensation. He went on to dance with The Royal Ballet in London and from 1983 to 1989 served as director of the Paris Opera Ballet. In addition to his technical prowess, Nureyev was an accomplished choreographer serving as the chief choreographer of the Paris Opera Ballet. He produced his own interpretations of numerous classical works, including Swan Lake, Giselle, and La Bayadère. ... (more) (less)
Tags: Russian (2), Ballet (2), Actor (2), Dancer (2), Tatar (2), Aids (1), Handsome (1), Ballet Dancer (1), Died 1993 (1), Born 1938 (1)
My tags:

nverland voted for 3 images 4 months ago

tiger_lola_gen_fan added this to a list 4 years, 6 months ago
Gay men (49 person items)

Holy Godiva added this to a list 5 years, 3 months ago

rickterenzi voted for 25 images [View All] 5 years, 3 months ago