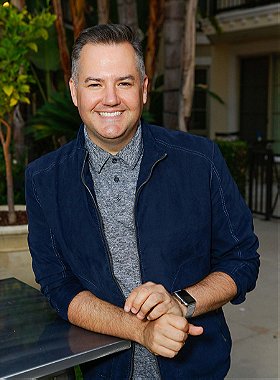 Mathews has subsequently appeared on Celebrity Fit Club, The Insider, Celebrity Big Brother and as a weekly panelist on Chelsea Lately. He is currently working on the shows Hollywood Today Live, RuPaul's Drag Race and Live from E!.

Mathews graduated in 2002 from the University of La Verne, in La Verne, California, where he majored in communications and was a speech and debate competitor.

Mathews began as an intern behind the scenes on The Tonight Show with Jay Leno. From December 2001, he covered movie premieres, the Academy Awards, two Winter Olympics Games and other events.

He appeared on the fifth season of VH1's reality television show, Celebrity Fit Club. During the course of the show, which premiered in April 2007, Mathews lost more than 40 lbs. and helped his team win the grand prize. He was also a guest host on The View on July 17, 2007.

Mathews appeared as a celebrity mob member on seven episodes of NBC's prime time game show 1 vs. 100 in early 2008.

In 2009, Mathews was a contributing correspondent on The Insider, and hosted a web show with The Insider called Inside Dish With Ross Mathews, where he took his viewers behind the scenes, as an "outsider" in Hollywood. Inside Dish became the official online web-shows for CBS's Big Brother and The Amazing Race. Also in 2009, Mathews co-hosted GSN's Big Saturday Night, a weekly game show. His other 2009 appearances included The Howard Stern Show and the 2009 Game Show Awards with Diane Mizota.

In 2010, Mathews joined the E! Network's red carpet team, filling in for Ryan Seacrest as co-host with Giuliana Rancic for E! Live From the Red Carpet coverage of the 2011 Screen Actors Guild Awards, the 2010 Emmy Awards, the 2011 Golden Globe Awards, and the 2011 Academy Awards.

In January 2011, Mathews starred in a pilot that he produced and co-wrote with fellow Chelsea Lately round table regular Heather McDonald. Titled Love or Hate, the pilot was made for the E! Network and was executive produced by Chelsea Handler and her company Borderline Amazing Productions. Mathews also appeared in the E! Network's After Lately, a show about the behind the scenes of Chelsea Lately. By September 2011, Mathews had formally moved on from The Tonight Show, returning for guest appearances, including for the "Woulda, Coulda, Shoulda" skit on December 14, 2011.

Mathews appeared in the fourth episode of the Bravo series Interior Therapy with Jeff Lewis in 2012, in which Lewis redesigned his and his boyfriend's garage.

In 2015, Mathews and Carson Kressley were named as new regular judges for the 7th season of RuPaul's Drag Race. At the end of 2015, Mathews began filling in as a guest host on Hollywood Today Live, which is syndicated on Fox. He became a permanent host on January 4, 2016. He also starred in the movie "Pup Star". The sequel, Pup Star: Better 2Gether premiered the following year.

Mathews guest starred as himself in an episode of the Mike Tyson Mysteries titled "Unsolved Situations" in 2016.

In 2018, he was announced as one of the eleven houseguests competing on the first American edition of Celebrity Big Brother.

Mathews is openly gay. Since 2008, he has been in a relationship with stylist Salvador Camarena. In 2013, the couple appeared in an episode of House Hunters while shopping for a home in Palm Springs. ... (more) (less)
Tags: Cute (1), Adorable (1), Girls Voice (1)
My tags:

Emmabell posted a image 5 years ago

IsabellaSilentRose added this to a list 5 years, 5 months ago
Golden Globes 2017 (145 person items)

IsabellaSilentRose added this to a list 5 years, 9 months ago
Emmy Awards 2016 (176 person items)