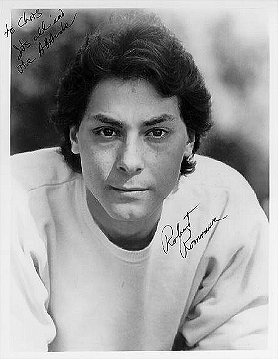 Robert is the son of Eileen (Maloof) and Raymond Romanos, a dentist. His brother is actor Richard Romanus. Robert originally came to Los Angeles to become a singer with the possibility of having a band. He instead ended up in Fast Times at Ridgemont High. He became a singing busboy at a restaurant for a little while, and later quit to pursue another job. When he came back for a visit and play a few songs at his old job, he met Steve Feldman who was working as a current singing busboy. The two ended up hitting it off and created their own group with the name Papa's Kitchen.

Romanus starred in the 1983 series The Best of Times as Pete Falcone. He also starred in the 1985 film Bad Medicine. His other TV roles include Fame as Miltie Horowitz in 1986-1987, and two short-lived shows: the 21 Jump Street spin-off Booker as Tony DeAngelo in 1989, and as Jeff Foster in Maggie Winters in 1998. Romanus has starred on soap operas such as Days of Our Lives as Marvin 'Speed' Selejko from 1983-1985, and The Young and the Restless as Lou in 2002. He has guest starred on many shows, including CHiPs, 21 Jump Street, Alien Nation, MacGyver, Providence, Will & Grace and My Own Worst Enemy. Romanus directed the 2008 drama Grapefruit Moon and had a small part in American Pie Presents: The Book of Love, as himself. In 2010 he played the guitar teacher in The Runaways. Starting 2012, Romanus opened up a café in North Hollywood, Bob's Espresso Bar.

onclelapin added this to a list 2 years, 1 month ago
celebrities I impersonate (85 person items)