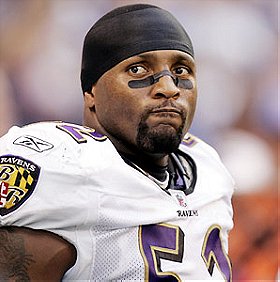 View all Ray Lewis pictures
Lewis played college football at the University of Miami. Drafted by the Ravens in 1996, he has played his entire career for the team, and is the last player remaining from the Ravens' inaugural season. He has been selected to thirteen Pro Bowls and been named an Associated Press All-Pro ten times. He won the NFL Defensive Player of the Year in 2000 and 2003; he was the sixth player to win the award multiple times. He was also the second linebacker to win the Super Bowl Most Valuable Player Award and the first linebacker to win the award on the winning Super Bowl team.
Tags: American Football (1), Baltimore Ravens (1), Football Player (1), NFL (1)
My tags:

Leo added this to a list 1 year, 3 months ago
Dancing with the Stars participants (336 person items)

Dj Levels added this to a list 3 years, 1 month ago
Sports...Football Infamous and Iconic (70 person items)