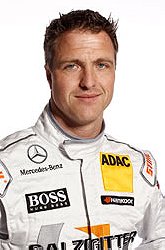 In 1992 he took part in the German carting championship competitions and won second place. In 1993 he entered the Junior-Championship competitions of the German Automobile Club (ADAC) and once again came in second. In the following year he drove in Formula 3 and won third place. In 1996 Ralf Schumacher participated in the Japanese Formula championships and won. On the basis of his success he was offered a contract as a driver with the Jordan Formula 1 team for the 1997 season. He made his Formula 1 debut on 9th March 1997 during the Australian Grand Prix in Melbourne. In 1999 Ralf Schumacher joined the Williams team for which he is driving now.

Ralf lives in Salzburg, Austria. His hobbies are carting, playing tennis and cycling. His favourite food is pasta and his favourite drink is apple juice mixed with sparkling water.

Having participated in the Grand Prix 83 times Ralf Schumacher has obtained 135 world champion points and one pole position. He claims three victories his own. Today Ralf Schumacher is regarded as one of the most promising young driving talents. ... (more) (less)
Tags: Athlete (1)
My tags: