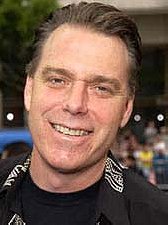 View all Raja Gosnell pictures
Raja Raymond Gosnell is an American film director and film editor best known for directing the films Home Alone 3, Never Been Kissed, Big Momma's House, Scooby-Doo, Beverly Hills Chihuahua, and The Smurfs. Commonly mistaken for being of Indian descent, Gosnell was named after his father's Saudi friend, Raja Mohideen. He is also known for his director-editor collaboration with Chris Columbus, in which he edited for Columbus Home Alone, Home Alone 2: Lost in New York and Mrs. Doubtfire.
Tags: Director (2), Born 1958 (2), American (2), Caucasian (1), Post-production Supervisor (1), Stop Directing Or Whatever It Is You Are Doing (1), Additional Editor (1), Second Unit Director (1), Film Editor (1), One Bad Film After The Other (1), Waste Of Space (1), Slayer Of Childhood Memories (1), Male (1), Hack (1), Editor (1)
My tags:

1. Gun and a Hotel Bible