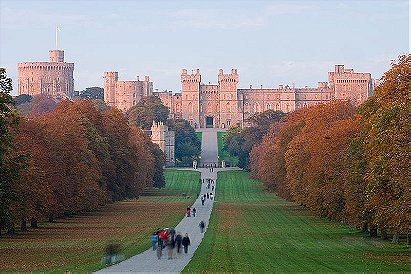 36 votes
Places I want to visit before I die (146 items)
list by IsabellaSilentRose
Published 8 years, 7 months ago

1 vote
View all Windsor Castle pictures (18 more)
Windsor Castle is a royal residence at Windsor in the English county of Berkshire. The castle is notable for its long association with the British royal family and for its architecture. The original castle was built in the 11th century after the Norman invasion by William the Conqueror. Since the time of Henry I, it has been used by succeeding monarchs and it is the longest-occupied palace in Europe. The castle's lavish, early 19th-century State Apartments are architecturally significant, described by art historian Hugh Roberts as "a superb and unrivalled sequence of rooms widely regarded as the finest and most complete expression of later Georgian taste".[1] The castle includes the 15th-century St George's Chapel, considered by historian John Robinson to be "one of the supreme achievements of English Perpendicular Gothic" design.[2] More than five hundred people live and work in Windsor Castle.

Originally designed to protect Norman dominance around the outskirts of London, and to oversee a strategically important part of the River Thames, Windsor Castle was built as a motte and bailey, with three wards surrounding a central mound. Gradually replaced with stone fortifications, the castle withstood a prolonged siege during the First Barons' War at the start of the 13th century. Henry III built a luxurious royal palace within the castle during the middle of the century, and Edward III went further, rebuilding the palace to produce an even grander set of buildings in what would become "the most expensive secular building project of the entire Middle Ages in England".[3] Edward's core design lasted through the Tudor period, during which Henry VIII and Elizabeth I made increasing use of the castle as a royal court and centre for diplomatic entertainment.

Windsor Castle survived the tumultuous period of the English Civil War, when it was used as a military headquarters for Parliamentary forces and a prison for Charles I. During the Restoration, Charles II rebuilt much of Windsor Castle with the help of architect Hugh May, creating a set of extravagant, Baroque interiors that are still admired. After a period of neglect during the 18th century, George III and George IV renovated and rebuilt Charles II's palace at colossal expense, producing the current design of the State Apartments, full of Rococo, Gothic and Baroque furnishings. Victoria made minor changes to the castle, which became the centre for royal entertainment for much of her reign. Windsor Castle was used as a refuge for the royal family during the bombing campaigns of the Second World War and survived a fire in 1992. It is a popular tourist attraction, a venue for hosting state visits, and Elizabeth II's preferred weekend home.

Maary added this to want to visit list 4 years, 2 months ago

EarlySparker added this to want to visit list 5 years, 3 months ago

Battleax voted for an image 5 years, 7 months ago

louispencer added this to want to visit list 5 years, 10 months ago

Phil_Sump added this to have visited list 5 years, 11 months ago