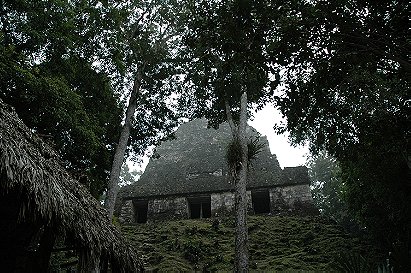 View all Tikal Temple VI pictures
Tikal Temple VI (also known as the Temple of the Inscriptions and Structure 6F-27) is a Mesoamerican pyramid in the ruins of the major Maya city of Tikal, in the Petén department of northern Guatemala. Temple VI is located at the southeastern end of the Mendez Causeway, which links the temple plaza with the site core. The temple faces west onto a walled plaza. The existence of the temple was first reported in 1951 by Antonio Ortiz on behalf of the Instituto de Antropología e Historia (IDAEH - "Institute of Anthropology and History"). The roof comb of the temple is inscribed on its sides and back with a lengthy hieroglyphic text. The pyramid's summit superstructure contains two chambers, and the highest surviving portion of the temple's roof comb stands 12 metres (40 ft) high.The pyramid superstructure is accessed via three west-facing doorways. The triple doorway and interior layout of the chambers suggest that Temple VI was in fact a palace-type structure rather than a temple.

Edoardo added this to want to visit list 4 years, 9 months ago

Tommyblond added this to want to visit list 5 years, 9 months ago