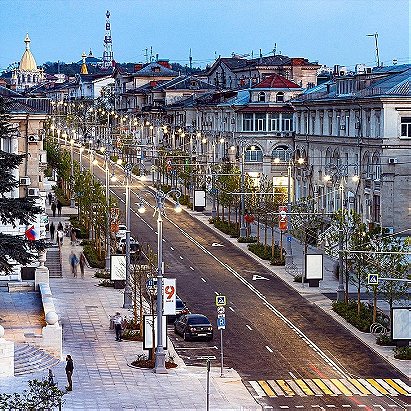 View all Sevastopol pictures
Sevastopol is the largest city in Crimea and a major port on the Black Sea. Due to its strategic location and the navigability of the city's harbours, Sevastopol has been an important port and naval base throughout its history. Since the city's founding in 1783 it has been a major base for Russia's Black Sea Fleet, and it was previously a closed city during the Cold War. As of January 2021, the city of Sevastopol, largely concentrated around Sevastopol Bay and with a total area of 864 square kilometres (334 sq mi), had a population of 429,922, while the larger conglomerate of surrounding towns and rural communities boosts the total population of the area to 509,992.

Sevastopol, along with the rest of Crimea, is internationally recognised as part of Ukraine, and under the Ukrainian legal framework the city enjoys special status. However, de facto it is administered by Russia, which annexed Crimea in 2014 and regards Sevastopol as a federal city. The city's population has an ethnic Russian majority, with a substantial minority of Ukrainians.

Sevastopol's unique naval and maritime features have been the basis for a robust economy. The city enjoys mild winters and moderate warm summers, characteristics that help make it a popular seaside resort and tourist destination, mainly for visitors from the former Soviet republics. The city is also an important centre for marine biology research. In particular, the military has studied and trained dolphins in the city for military use since the 1960s.