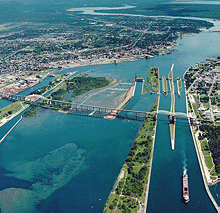 While there is some debate on the exact meaning of "Sault" in Sault Ste. Marie, scholars of early French note that the word translates into jump, referring to the place where one needs to "jump", or put into the St. Mary’s River. This translation relates to the treacherous rapids and cascades of the St. Mary's River, which descend more than 20 feet from the level of Lake Superior to the level of the lower lakes. Hundreds of years ago, this prohibited boat traffic and required an overland portage from one lake to the other. Thus the entire name translates to "Saint Mary's Rapids" or "Saint Mary's Falls". The word sault is pronounced [so] in French, and /ˈsuː/ in the English pronunciation of the city name.[6] Residents of the city are called Saultites.[pronunciation?]

Sault Ste. Marie is bordered to the east by the Rankin and Garden River First Nation reserves, and to the west by Prince Township. To the north, the city is bordered by an unincorporated portion of Algoma District, which includes the local services boards of Aweres, Batchawana Bay, Goulais and District, Peace Tree and Searchmont.

The city's census agglomeration, including the townships of Laird, Prince and Macdonald, Meredith and Aberdeen Additional and the First Nations reserves of Garden River and Rankin, had a total population of 79,800 in 2011.

Sault Ste. Marie is the seat of the Algoma District.

To the south, across the river, is the United States and the city of Sault Ste. Marie, Michigan. The two cities are joined by the International Bridge, which connects Interstate 75 on the Michigan side and Huron Street (and former Ontario Secondary Highway 550B) on the Ontario side. Shipping traffic in the Great Lakes system bypasses the Saint Mary's Rapids via the American Soo Locks, the world's busiest canal in terms of tonnage that passes through it, while smaller recreational and tour boats use the Canadian Sault Ste. Marie Canal.

Established as one settlement by Jesuit missionaries in the 17th century, the two saults remained so until after the War of 1812.[7]

Rylvan added this to want to visit list 5 years, 4 months ago