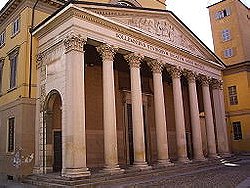 View all Pavia pictures
Pavia (Italian: [paˈviːa] ( listen); Lombard Pavia; Latin: Ticinum; Medieval Latin Papia) is a town and comune of south-western Lombardy, northern Italy, 35 kilometres (22 miles) south of Milan on the lower Ticino river near its confluence with the Po. It is the capital of the province of Pavia. It has a population of c. 68,000. The city was also the capital of the Kingdom of the Lombards from 572 to 774.

Pavia is the capital of a fertile eponymous province known for agricultural products including wine, rice, cereals, and dairy products. Although there are a number of industries located in the suburbs, these tend not to disturb the peaceful atmosphere of the town. The town also is home to the ancient University of Pavia. The University, together with the IUSS (Institute for Advanced Studies of Pavia), the Ghisleri College, the Borromeo College, the Nuovo College, the Santa Caterina College and the EDiSU, belongs to the Pavia Study System. Furthermore, Pavia is the see city of the Roman Catholic diocese of Pavia. The city possesses a vast amount of artistic and cultural treasures, including several important churches and museums, such as the well-known Certosa di Pavia.

Sanpellegrino rated this 10/10 1 month ago