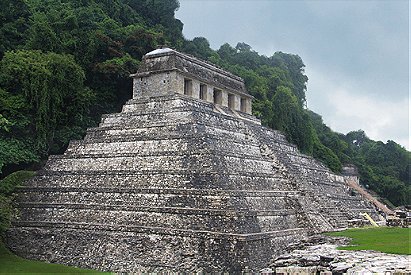 View all Palenque pictures (12 more)
Palenque was a Maya city state in southern Mexico that flourished in the 7th century. The Palenque ruins date back to 226 BC to around 799 AD. After its decline, it was absorbed into the jungle, which is made up of cedar, mahogany, and sapodilla trees, but has been excavated and restored and is now a famous archaeological site attracting thousands of visitors. It is located near the Usumacinta River in the Mexican state of Chiapas, located about 130 km (81 mi) south of Ciudad del Carmen[citation needed] about 150 m (164 yd) above sea level. It stays at a humid 26°C (79°F) with roughly 2160 mm (85 in) of rain a year.

Palenque is a medium-sized site, much smaller than such huge sites as Tikal or Copán, but it contains some of the finest architecture, sculpture, roof comb and bas-relief carvings that the Mayas produced. Much of the history of Palenque has been reconstructed from reading the hieroglyphic inscriptions on the many monuments; historians now have a long sequence of the ruling dynasty of Palenque in the 5th century and extensive knowledge of the city-state's rivalry with other states such as Calakmul and Toniná. The most famous ruler of Palenque was Pacal the Great whose tomb has been found and excavated in the Temple of the Inscriptions.

By 2005, the discovered area covered up to 2.5 km² (1 sq mi), but it is estimated that less than 10% of the total area of the city is explored, leaving more than a thousand structures still covered by jungle.

luisa31 added this to want to visit list 2 years, 5 months ago

Edoardo added this to want to visit list 5 years, 2 months ago