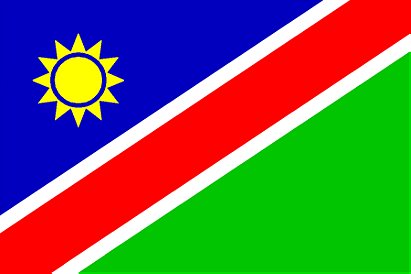 12 votes
Around the World With Models (105 items)
list by The She Brony
Published 3 years, 10 months ago

8 votes
Beauty Around the World (121 items)
list by unicornsugar
Published 3 years, 5 months ago

1 vote
View all Namibia pictures (14 more)
Namibia (/nəˈmɪbiə/, /næˈ-/),[5][6] officially the Republic of Namibia (German: About this sound Republik Namibia (help·info); Afrikaans: Republiek van Namibië), and formerly South West Africa, is a country in southern Africa whose western border is the Atlantic Ocean. It shares land borders with Zambia and Angola to the north, Botswana to the east and South Africa to the south and east. Although it does not border Zimbabwe, less than 200 metres of the Zambezi River (essentially a small bulge in Botswana to achieve a Botswana/Zambia micro-border) separates them at their closest points. It gained independence from South Africa on 21 March 1990, following the Namibian War of Independence. Its capital and largest city is Windhoek. Namibia is a member state of the United Nations (UN), the Southern African Development Community (SADC), the African Union (AU), and the Commonwealth of Nations.

The dry lands of Namibia were inhabited since early times by San, Damara, and Namaqua, and since about the 14th century AD by immigrating Bantu who came with the Bantu expansion. Most of the territory became a German Imperial protectorate in 1884 and remained a German colony until the end of World War I. In 1920, the League of Nations mandated the country to South Africa, which imposed its laws and, from 1948, its apartheid policy. The port of Walvis Bay and the offshore Penguin Islands had been annexed by the Cape Colony under the British crown by 1878 and had become an integral part of the new Union of South Africa at its creation in 1910.

Uprisings and demands by African leaders led the UN to assume direct responsibility over the territory. It recognised the South West Africa People's Organisation (SWAPO) as the official representative of the Namibian people in 1973. Namibia, however, remained under South African administration during this time as South-West Africa. Following internal violence, South Africa installed an interim administration in Namibia in 1985. Namibia obtained full independence from South Africa in 1990, with the exception of Walvis Bay and the Penguin Islands, which remained under South African control until 1994.

Namibia has a population of 2.1 million people and a stable multi-party parliamentary democracy. Agriculture, herding, tourism and the mining industry – including mining for gem diamonds, uranium, gold, silver, and base metals – form the basis of Namibia's economy. Given the presence of the arid Namib Desert, it is one of the least densely populated countries in the world. Namibia enjoys high political, economic and social stability.

Georgini added this to a list 1 year, 3 months ago

unicornsugar added this to a list 3 years, 5 months ago

The She Brony added this to a list 3 years, 10 months ago

sophie85 added this to want to visit list 4 years, 11 months ago