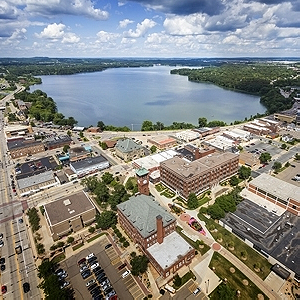 View all Menomonie, Wisconsin pictures (3 more)
Menomonie (/məˈnɒməni/) is a city in and the county seat of Dunn County in the western part of the U.S. state of Wisconsin.[5] The city's population was 16,264 as of the 2010 census.

The city center is at the south end of Lake Menomin, a reservoir on the Red Cedar River.