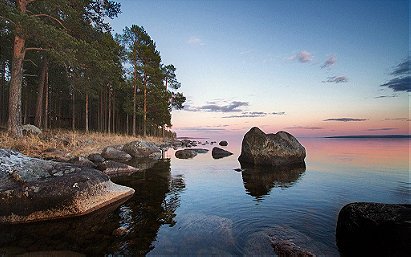 View all Lake Onega pictures (5 more)
Lake Onega is a lake in northwestern Russia, on the territory of the Republic of Karelia, Leningrad Oblast and Vologda Oblast. It belongs to the basin of the Baltic Sea, and is the second-largest lake in Europe after Lake Ladoga. The lake is fed by about 50 rivers and is drained by the Svir.

There are about 1,650 islands on the lake. They include Kizhi, which hosts a historical complex of 89 Orthodox churches and other wooden structures of the 15th–20th centuries. The complex includes a UNESCO World Heritage site, Kizhi Pogost. The eastern shores of the lake contain about 1,200 petroglyphs (rock engravings) dated to the 4th–2nd millennia BC, which have also been inscribed as a UNESCO World Heritage site. The major cities on the lake are Petrozavodsk, Kondopoga and Medvezhyegorsk.