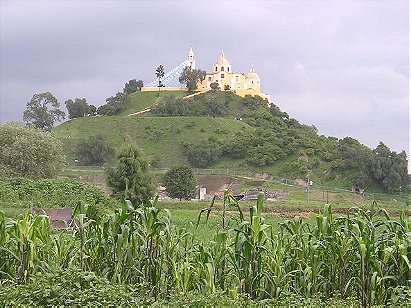 View all Great Pyramid of Cholula pictures (1 more)
The Great Pyramid of Cholula, also known as Tlachihualtepetl (Nahuatl for "artificial mountain"), is a huge complex located in Cholula, Puebla, Mexico. It is the largest archaeological site of a pyramid (temple) in the New World. The pyramid stands 55 metres (180 ft) above the surrounding plain, and in its final form it measured 400 by 400 metres (1,300 by 1,300 ft). The pyramid is a temple that has traditionally been viewed as having been dedicated to the god Quetzalcoatl. The architectural style of the building was closely linked to that of Teotihuacan in the Valley of Mexico, although influence from the Gulf Coast is also evident, especially from El Tajín.